The majority consensus after listening to the full album has been that Lulu isn’t very good.  However, one particular Canadian rocker hated what he heard so much, that he’s supposedly selling his entire Metallica collection.

Rock singer/guitarist Danko Jones first hit his Twitter account with a review of Lulu, calling it the Ishtar, Waterworld, and Battlefield Earth of rock and roll in separate tweets [note for our non-cinema buff fans: the three movies he mentions are considered by many to be the biggest movie flops/train wrecks]. The following day though, Danko made an offer to fans to show his dislike for Lulu, tweeting the following with the picture below attached:
“Good Morning! Heard Metallica/Lou Reed album last night. Metallica collection now for sale. Tweet your $$$.” 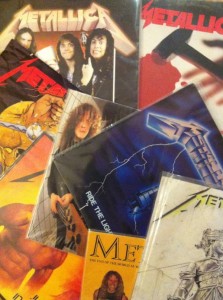 Whether Jones will seriously go through with selling his entire collection (including some nice vinyl pressings of The $5.98 E.P.: Garage Days Re-Revisited and Jump In The Fire) has yet to be seen.
While it does show how negative of a reaction Lulu has caused, it also does seem a little drastic. Does an experimental album from Metallica really justify selling collector items that previously meant so much to you and millions of fans as well? With that said, how much do you want for the “Jump In The Fire” single vinyl, Jones?